Last Saturday, December 7, Thiago Silva was already playing his 20th game of the season and enjoying his 18th win in all competitions, 3-1 vs Montpellier.

But for the Paris Saint-Germain captain, this victory also capped off a very special day: his 300th match in the famous red and blue jersey. Since the club was founded in 1970, only six players have played more than the Brazilian for Paris Saint-Germain. 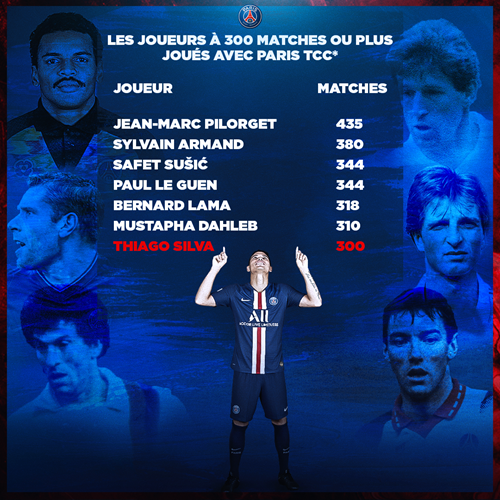 What have leanred about the man in 300 matches?

More than 7 years after crossing the Alps and settling in the French capital, Thiago Silva remains a reference in his position. A great ability to read the game and anticipation, dominant in the air and able to stop the best strikers in full flight: the art of defending is told every weekend from the Brazilian's boots.

Physically, at the age of 35, the defender has never looked so solid. His professionalism and impeccable lifestyle contribute in no small part to the fact that he never strayed from Thomas Tuchel's starting line-up. As a result, he has only been rested twice this season.

"He's an incredible captain. He is a leader, a role model for us, in the dressing room and on the field. He's been playing at an exceptional level since I've been here. It makes a big difference if he plays or not. Age is not the most important thing. What matters most is what happens every day, and on the field. He's an exceptional guy, a very reliable character," the coach confided last November at a press conference.

The only constant feature of Paris' central defence over the past seven years, O Monstro has also proved to be a true leader, an inexhaustible source of energy on the pitch. An average 86 minutes played per game since he arrived is proof of his importance in the team. It is not coincidence if no other player since 2010 has worn the captain's armband as much as he has, a total of 183 times... Well ahead of the likes of Claude Makelele (33) and Mamadou Sakho (30).

Off the field, the love story between the City of Light and the Rio de Janeiro native came true last March, when Thiago Silva, his partner and their two children obtained French nationality. "Paris is not a side note. It's a part of my life. Paris is part of my history. No one can take it away from me. I feel French, beyond the passport. Today, I am Brazilian, but my second home is Paris. I'll be a Parisian for life," he said to France Football.

And the neo-Frenchman has carried the Paris Saint-Germain colours beyond the French borders too. With a record-breaking 56 Champions League matches for the club, Thiago Silva is the Rouge et Bleu leader on the continent. In fact, he has taken part in 81% of Paris Saint-Germain's matches on the European stage since his arrival.

From his inspirational performance alongside Marquinhos in an electric Parc des Princes against Liverpool to his passionate celebration following Javier Pastore's goal against Chelsea, to his breath-taking header at Stamford Bridge to overcome Chelsea, Thiago Silva is a shining beacon in the history of Paris Saint-Germain.

And if this season the club's defensive performances are so good, both in Ligue 1 and on the continent with only two goals conceded in five European matches, the captain has had a lot to do with it.