The first part of the EHF Champions League

This summer, the draw of the EHF Champions League didn't spare Paris Saint-Germain Handball, who have done battle in a very tough Group B. Take a look back at the capital club's thrills and spills during the first part of the European campaign.

Heavyweights to start
It was a big game that awaited Les Rouge et Bleu in their opening fixture: they had the difficult task of travelling to Veszprém and its 4,600 spectators to start their campaign. In spite of the hostile atmosphere, Paris gave a very good account of themselves in Hungary and had their noses in front at the break (30': 13-17), after Luc Steins had scored on the buzzer. Unfortunately for the capital club, the second 30 minutes proved to be more complicated. Egyptian international Yahia Khaled was particularly inspired and his 10 from 13 allowed the home side to turn things around (34-31). Our players left without a point, but having turned in a promising performance.

Off the mark
A week later, Raul Gonzalez's men played host to a Dinamo Bucharest side high on confidence after beating Kielce on Matchday 1. But this time, the Romanians did not pull off the upset, despite having clocked the arrival of former Parisian and French international Cedric Sorhaindo in the summer. In front of their fans, our players controlled the match, with Ferran Solé Sala firing a 6 from 7 while Nedim Remili and Kamil Syprzak each bagged five goals before Mikkel Hansen blasted home on the buzzer to help Paris clinch the first points of their European campaign (41-30).

Two perilous trips
After a draw in Flensburg (27-27) and a prolific victory against Zaporozhye (40-32), the Parisians had a very complicated end of October. They had to face two of Europe's best - Barcelona and Kielce - on the road. The first match was at the Palau Blaugrana, where the reigning European Champions had not lost in the Champions League for six years. Our players were not far from springing an upset - anything could still happen as the match went into the final ten minutes (55': 26-25). But the final moments went in favour of the Spaniards. Despite yet another dazzling performance from Vincent Gérard, who with 14 saves perfectly responded to his Barcelona counterpart, Gonzalo Perez de Vargas (17 saves), the capital club could not avoid defeat (30-27).

On the next matchday, Les Rouge et Bleu challenged Group B leaders Kielce, who hadn't lost since the opening day of the campaign. The reunion with our former youth academy star Dylan Nahi was electric! The French international didn't spare his ex-teammates and finished the game with a 6 from 7. Mikkel Hansen's 8 from 8 wasn't enough to turn things round after a poor start (30': 17-12). Our team tried to come back in the second half and at times came very close (36': 22-19). But, pushed by their 4 000 supporters, the Poles finished the game better and held out to notch a fifth successive win and leave Paris five points adrift of the Group B lead.

Paris get back on track
Victory was therefore mandatory when Paris played host to Porto in the last game of the first half of the group stage, at the Stade Pierre de Coubertin. Especially since the Portuguese had exactly the same record as Paris before throw-off (five points from two wins, one draw and three defeats). The importance of this match was not neglected by anyone in the Parisian ranks. Even less by the defense, who pulled off an historic first half! With only four goals conceded in 30 minutes (30': 18-4), our rear-guard finished only one goal behind Kiel's competition record, set in 2015 against Metalurg Skopje (17-3). Vincent left the court at the break with nine saves at 60%, and watched on from the bench as his teammates finished the job (33-19).

The return leg came seven days later. All our players are aware that the task would be even more difficult away from home, following their big win in the first leg. Once again, Les Rouge et Bleu were up to the challenge. Kamil Syprzak, for example, was still as skilful as ever, finishing with nine goals to follow on from his eight goal-haul the week before. It was now the turn of the attack to showcase themselves! At the break, they had already found the net 23 times (30': 15-23). Our team resisted until the end against a Portuguese side who wouldn't lie down (30-39). This success - combined with the other results of Matchday 8 - allowed Paris to go level with Barcelona one point shy of second place, which qualifies directly for the quarterfinals).

Thunderous end to the year
This first part of the European campaign ended as it began: with huge clashes! This time, it was at the Stade Pierre de Coubertin that the capital club played host to Kielce. The Poles were still top of the Group B table thanks to a continued win streak of seven matches - including two against Barcelona. The match lived up to all its promise and while it looked like a tense final ten minutes were on the cards, the Parisians had other ideas! In a ten-minute stretch, they inflicted a 7-2 on the visitors and out themselves in a favourable position heading into the final minutes (50': 27-22). The trend was confirmed a few moments later, at the final buzzer as Paris claimed victory and inched closer to the Group B lead (32-27).

Finally, the icing on the cake of a great year was looking good. On 9 December, Paris Saint-Germain Handball played host to Barcelona. Level in the standings on 11 points, the two teams had an opportunity to take second place in Group B from Veszprém, who had been beaten earlier in Flensburg (30-27). Les Rouge et Bleu struck first through Ferran Solé Sala (8': 9-3). The match went on to prove more complicated for our team, who even found themselves with their backs to the wall in the final minutes (55': 24-27). But our players dug deep! The Catalan attack faltered, while Nedim Remili, Henrik Toft Hansen and Mathieu Grébille all struck to level it up in the dying seconds. A superb match that did not have a winner (28-28), but which hinted at more electrifying group stage action to come: Paris, Barcelona and Veszprém are all tied on points, just behind leaders Kielce. 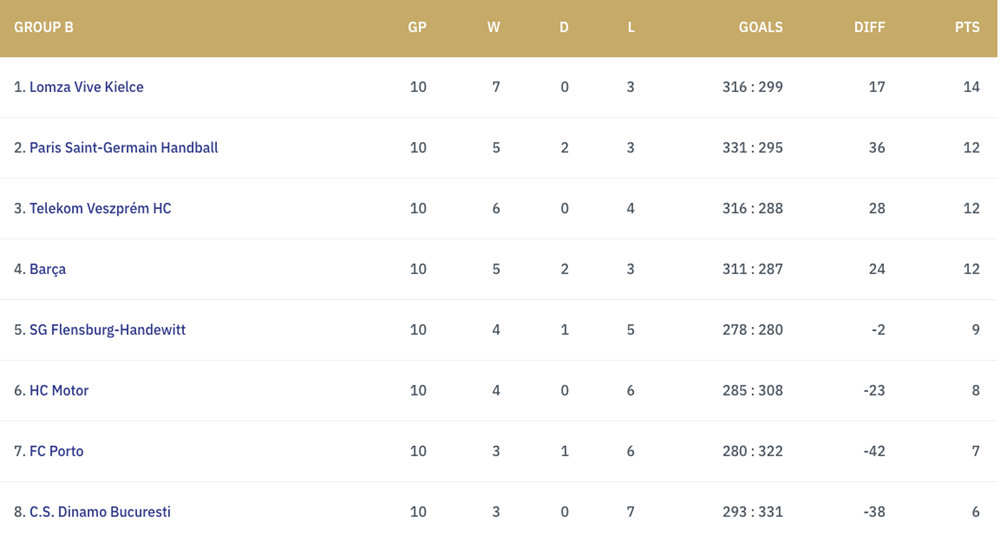