Tears, joy and a real show: a successful final outing for Paris

At the heart of the festivities for the Ligue 1 title win, legends were honoured, goodbyes were made to Angel Di Maria and joy was shared as Kylian Mbappé's contract extension was announced. And of course, Mauricio Pochettino's side shone in their final match of the season against Metz (5-0). 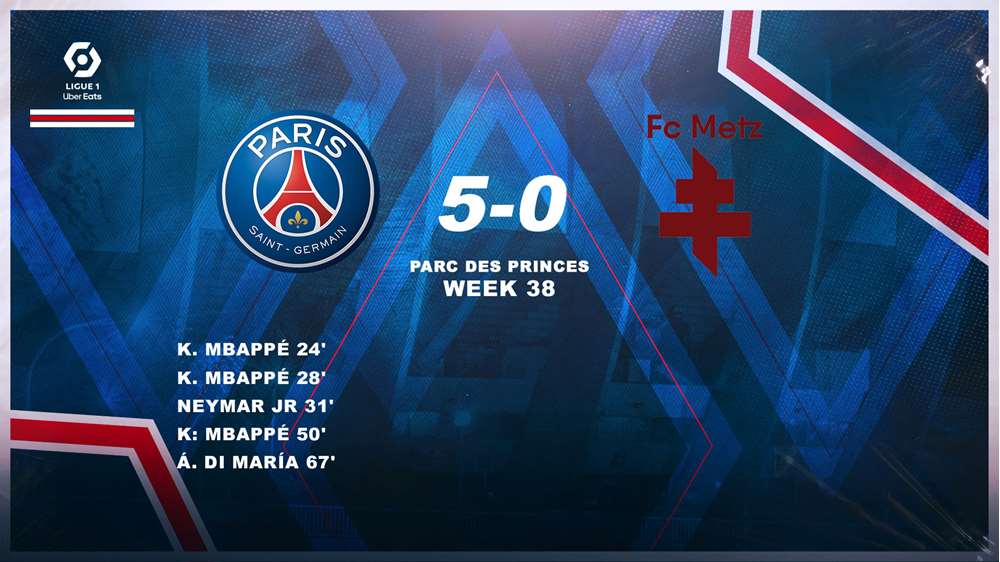 It's often said that the evenings of final games of the season have a particular feel to them. It's the opportunity for final achievements, an opportunity to share together. The time to say goodbye, and allow our focus to turn to new horizons. These are the traditions for Matchday 38 of Ligue 1. But for the people of Paris, this was a final match unlike any other.

This Saturday will remain in the memories of all. Because the achievements preceded the party, with the tenth league title celebrated by club legends. And one of those legends, our n°7, the immense Kylian Mbappé, declared his desire to continue his adventure in the capital. 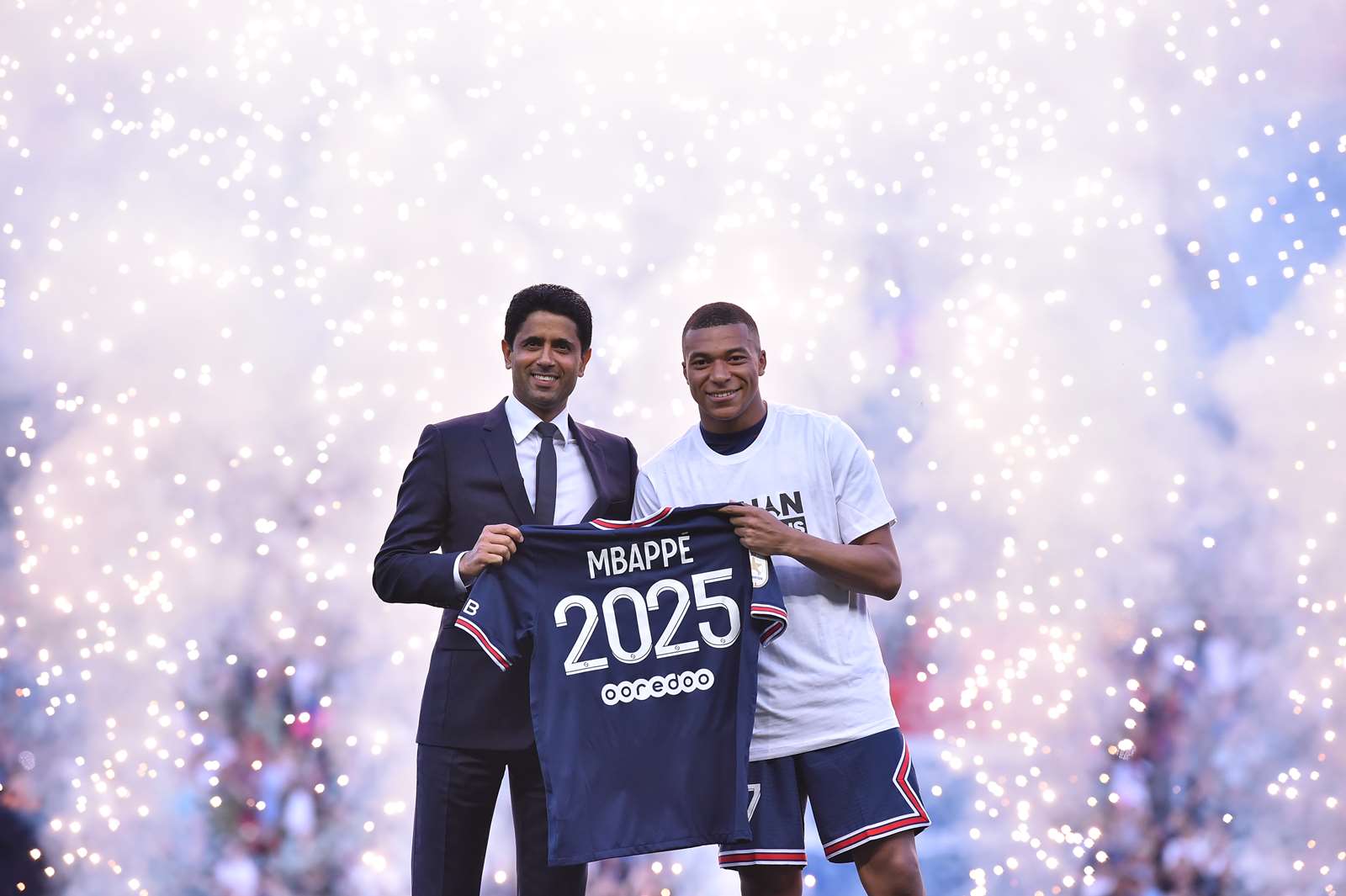 And for another, Angel Di Maria, his 'goodbye' turned into an emotional 'farewell'. There was joy, smiles, pride and a few tears on Saturday during this particularly special PSG-Metz. It was to be an encounter that would be dominated by the stars of the team, with a XXL attack featuring Di Maria, Neymar Jr, Messi and Mbappé. The show could get underway! 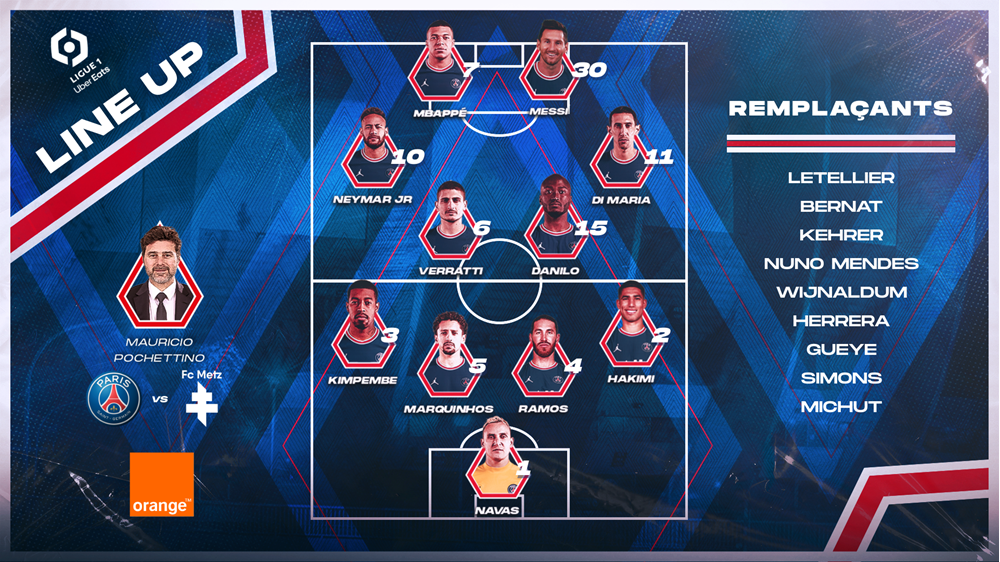 Entertainment before, and entertainment after: all that was needed was some entertainment during the match. 90 minutes to bring the season to a close in the best possible manner. An incredibly motivated Leo Messi (19'), Neymar Jr (22') and Angel Di Maria (23') were first to try their luck from distance and gave us a first taste of what was to come. On this momentous evening, what could be better than a beautiful assist from Di Maria for the unstoppable Kylian Mbappé? 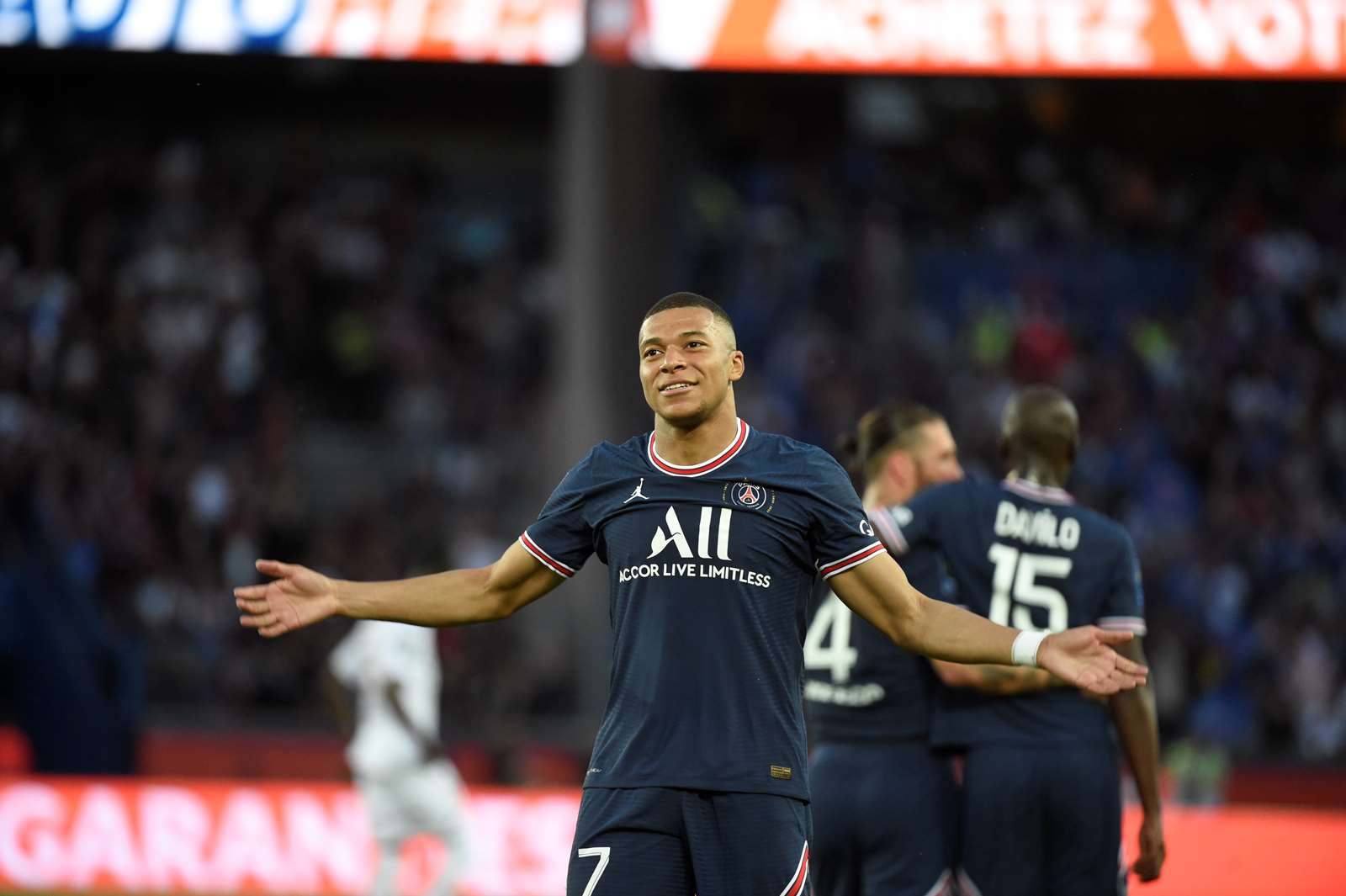 Paris Saint-Germain's all-time best provider played an inch-perfect pass for Kylian Mbappé who opened the scoring in style in front of a Parc determined to celebrate its two heroes (1-0, 25'). Shortly after came the second, with another lightning show of pace from Kylian, who found the back of the net with his left from an incredibly tight angle after a laser pass from Leo Messi (2-0, 28')!

It was then time for another star to mark a symbolic record: Neymar Jr. The Brazilian scored his 100th goal with a poacher's finish during Paris' period of domination (3-0, 33'). And it wasn't over yet. With the atmosphere created by the stadium, the match continued in good spirit, with an open and pleasant second half. 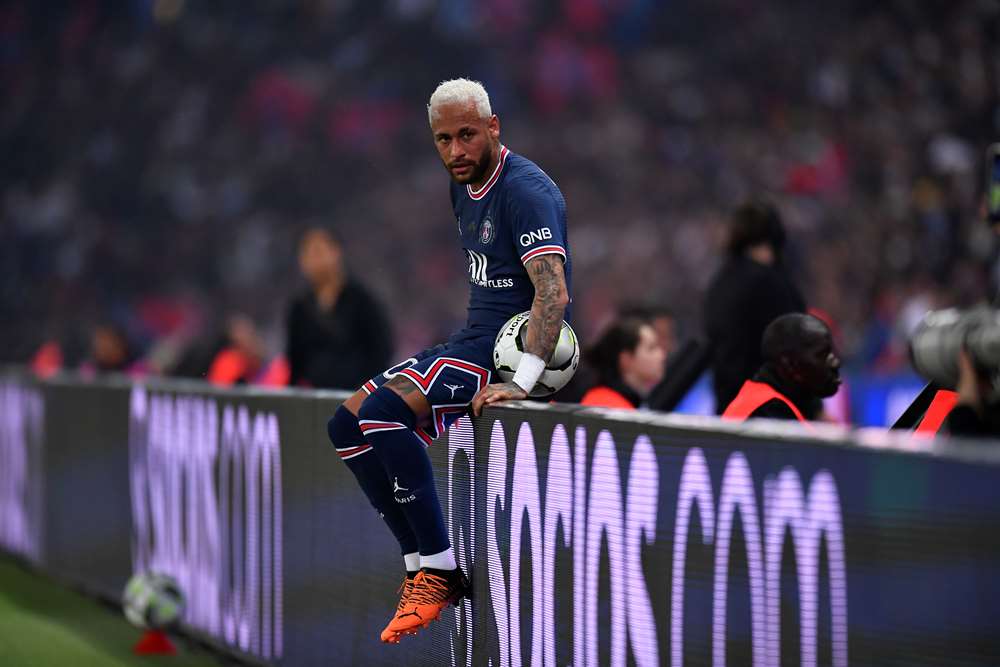 With just 45 minutes left to play, to enjoy and to savour in a stadium that had gathered together for the last time this year. On the field, Les Parisiens continued to impress. Kylian Mbappé was determined to maintain his role as the star of an evening unlike any other. After winning the ball high up the pitch, the world champion made it a hat-trick (4-0, 51'). The Frenchman was determined to add top scorer (27) to the title for the most assists (17) - for the first time in the league's history. 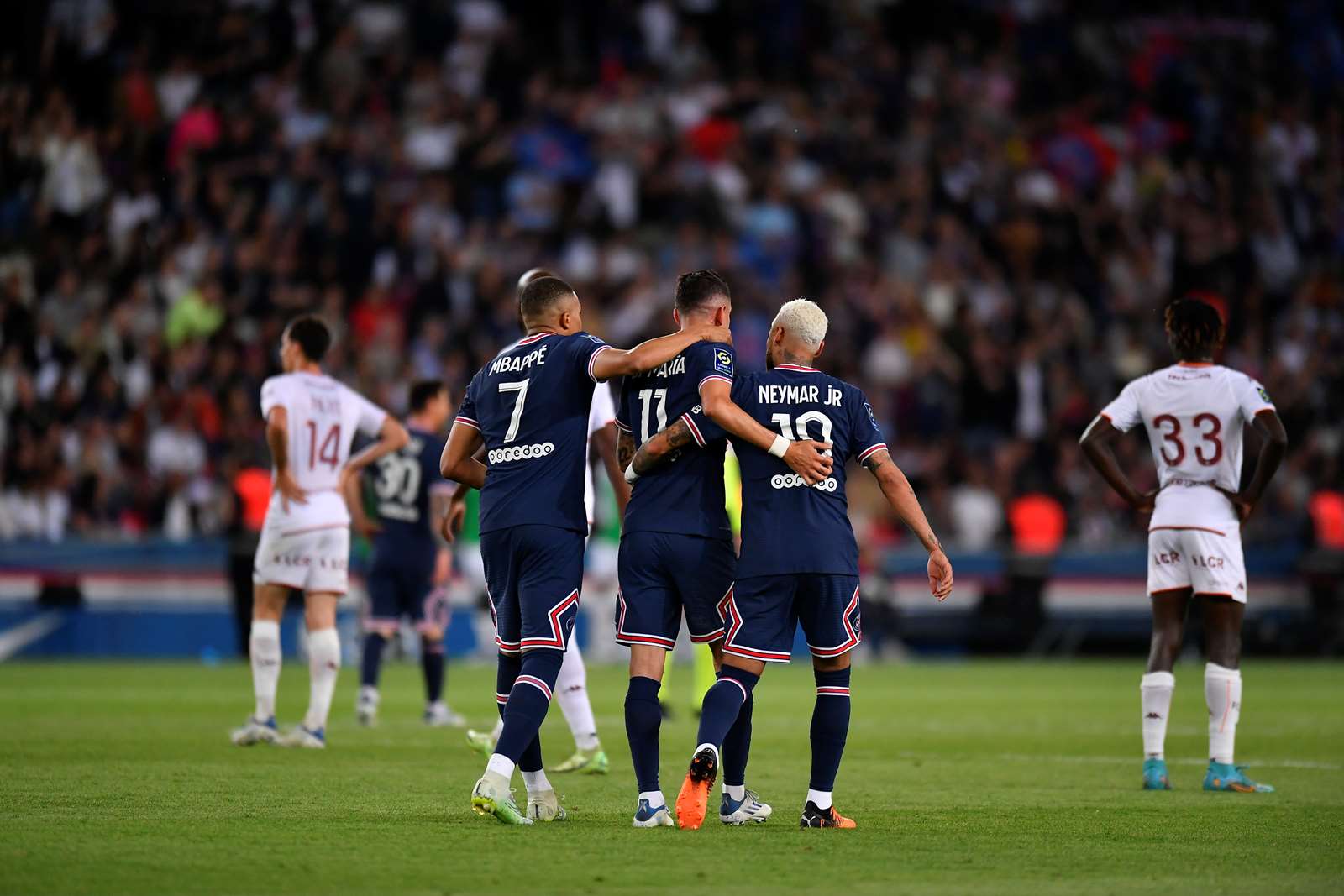 With a numerical advantage for the final half an hour, our Rouge et Bleu didn't hesitate to bring the evening to a close with further attacking play... Like the efforts from Mbappé and Messi which were denied by the bar. But how could the evening close without our Fideo's tears as he scored the fifth goal of the encounter (5-0, 68')? The hugs from his teammates, a standing ovation from the whole of the ground for their legend, and a guard of honour. A moment that will never be forgotten.