To highlight the talent of their outstanding 21/22 squad, Paris Saint-Germain are dressing in black. Officially launched today, the Third collection is predominantly black and grey, making a powerful statement. It is inspired by the shirts in which the club has dazzled since the 1990s and which have remained etched in the Parisian supporters’ memories. Several items of the collection pay tribute to the supporters by using Paris area postcode numbers.

Because its colours are so restrained, the 21/22 Third strip is the perfect backdrop to highlight the exploits of the Parisian players, particularly on the European stage where their appearances are eagerly anticipated by football lovers across the globe.

Two swooshes adorn each of the sleeves of the 21/22 Third kit, representing Paris and Paname (a nickname fondly used by PSG supporters for their team). Taking pride of place in the centre of the shirt, the club logo is electric red, illustrating the immense energy of the Rouge & Bleu fans who push the players to give their very best.

The 21/22 Third jerseys are made from 100% recycled polyester which comes from plastic bottles. This manufacturing method combines top-quality performance with a reduced carbon footprint. 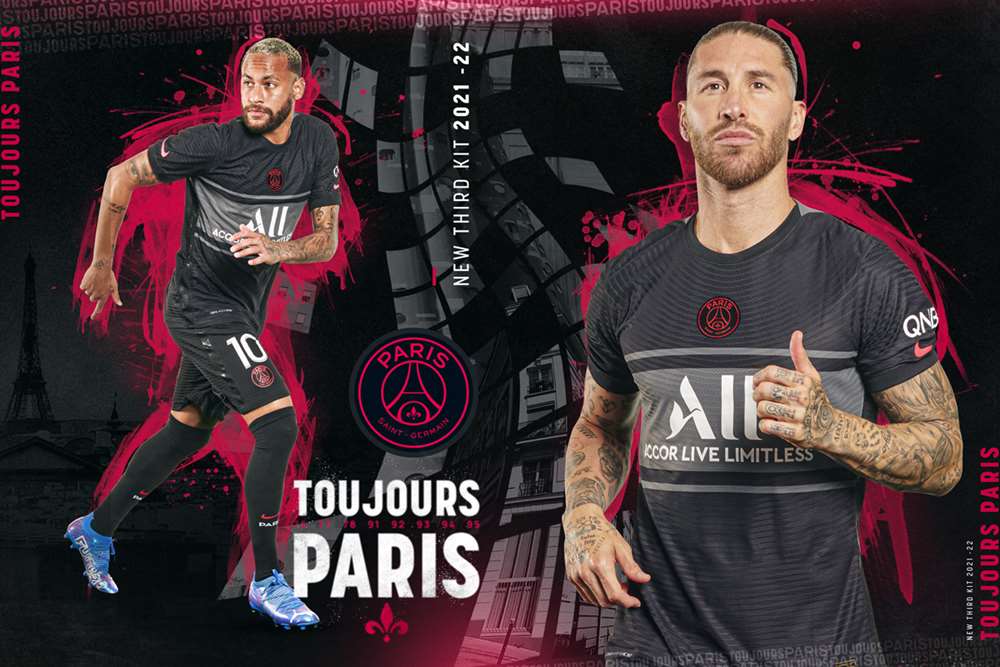 No other sport captures global attention like the beautiful game and we see this as an opportunity to scale more sustainable solutions in order to help protect the future of sport. As part of Nike’s wider Move to Zero initiative – a journey towards zero carbon and zero waste – we are focused in scaling the usage of lower-carbon material alternatives. Recycled polyester* reduces carbon emissions by up to 30% compared to virgin polyester and that’s why since 2010 Nike has been using rPoly to produce football kits.

* Each year, Nike diverts an average of one billion plastic bottles from landfills and waterways by creating and designing with recycled polyester. Plastic bottles are collected, cleaned and melted down to produce a high-quality yarn for manufacturing and is part of Nike’s wider Move to Zero initiative with football apparel leading the way in sustainability.