It's the other great story of the end of the season. The Paris Saint-Germain forward scored against Metz in the 38th and final matchday of Ligue 1 and took advantage of the opportunity to reach the 100-goal mark for the Rouge et Bleu and become the sixth player to do so in the club's history. 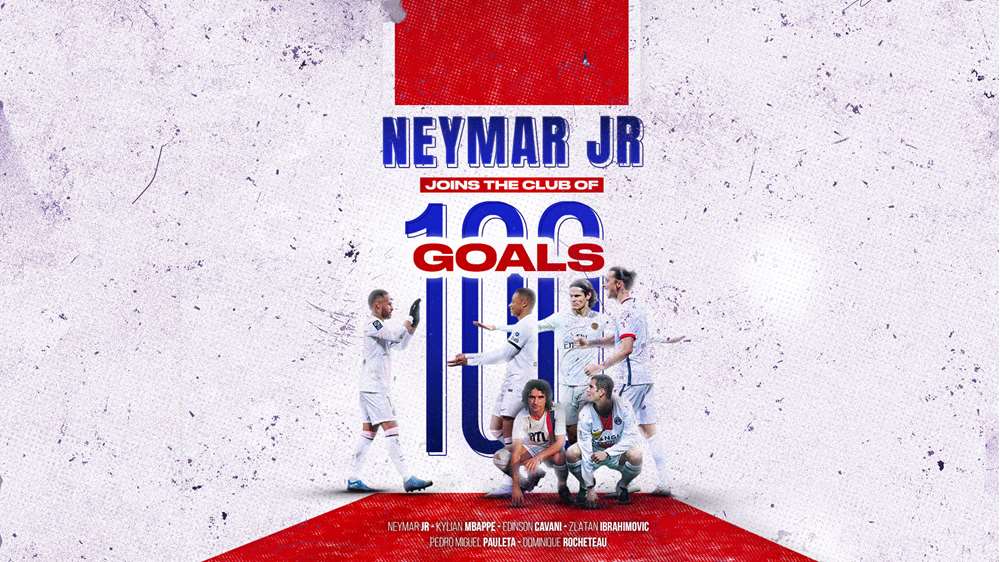 It's a milestone that very few players can boast of attaining. 100 goals in a Paris Saint-Germain shirt.
By reaching this staggering tally, Neymar Jr. had the luxury of entering the 100-goal club for the very last match of the season, equalling Dominique Rocheteau in the all-time top scorers' for Paris. A very exclusive club in which Zlatan Ibrahimovic, Edinson Cavani, Pedro Miguel Pauleta and his team-mate Kylian Mbappé also feature. 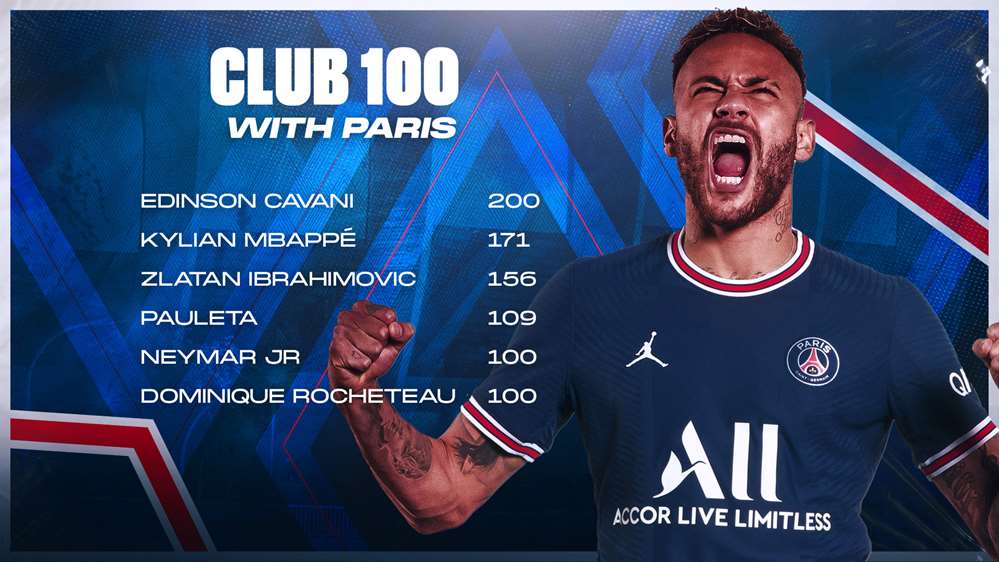 So, what can we learn from these 100 goals? Firstly, his fondness for the Parc des Princes, of course! With 55 goals at home, Ney loves playing in the capital. Secondly, the Brazilian has shown over the years that he is just as good at putting in consistent performances as he is at excelling on the big nights, scoring no less than 68 goals in Ligue 1, and also 20 times in the prestigious Champions League. 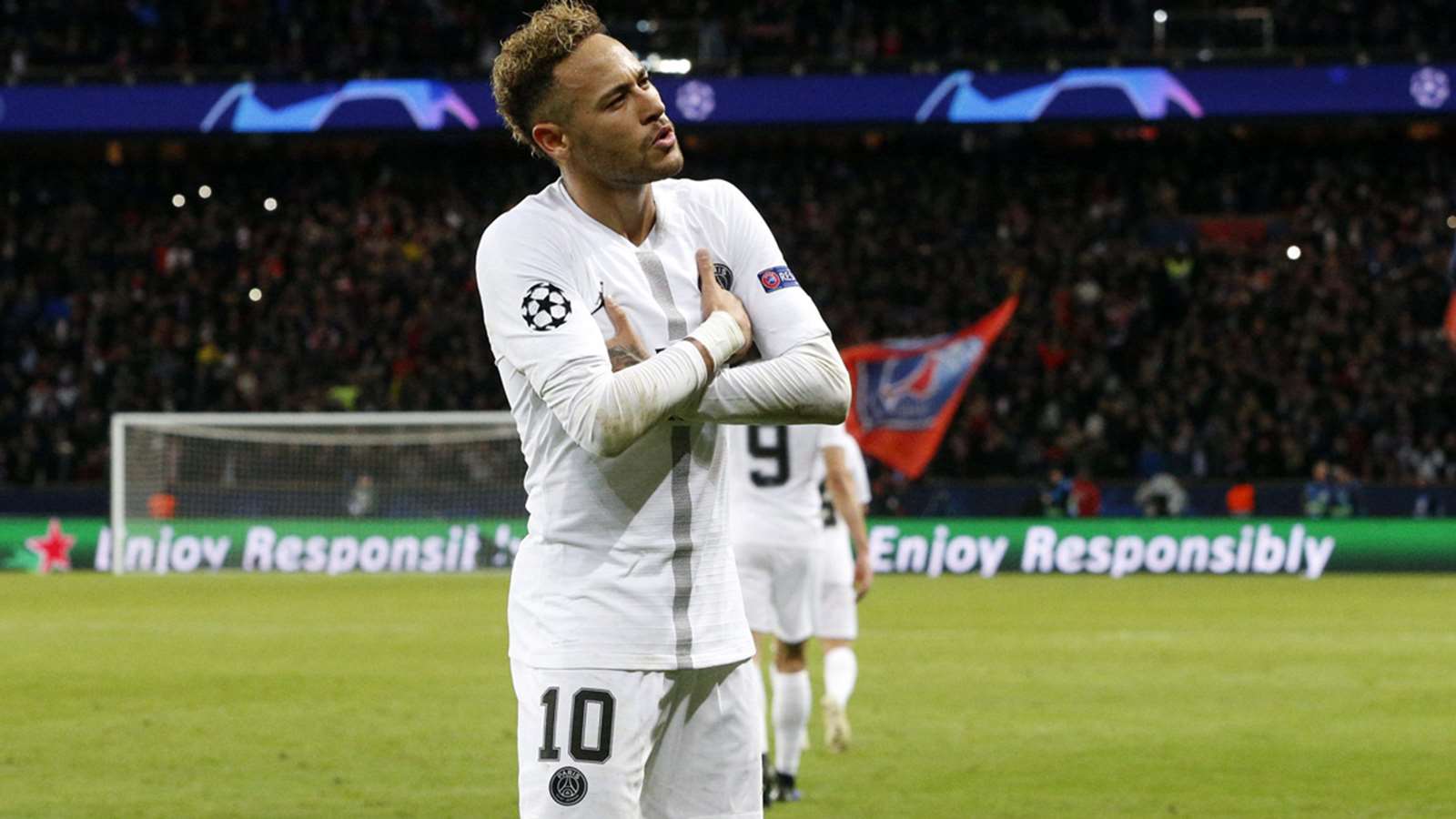 Lastly, we can enjoy analysing the way in which the No.10 has scored goals. For example, 67 of his goals were scored with his right foot, compared to 28 with his left. He has lightning speed, incredible passing and fantastic dribbling, but he also is incredible on set-pieces. Neymar Jr has scored no less than 20 penalties, becoming a master in the art of outwitting the goalkeeper. The Brazilian is also an incredible direct free kick tacker, having scored 7 of them. It's hard to forget those incredible efforts against Bordeaux or Red Star Belgrade. 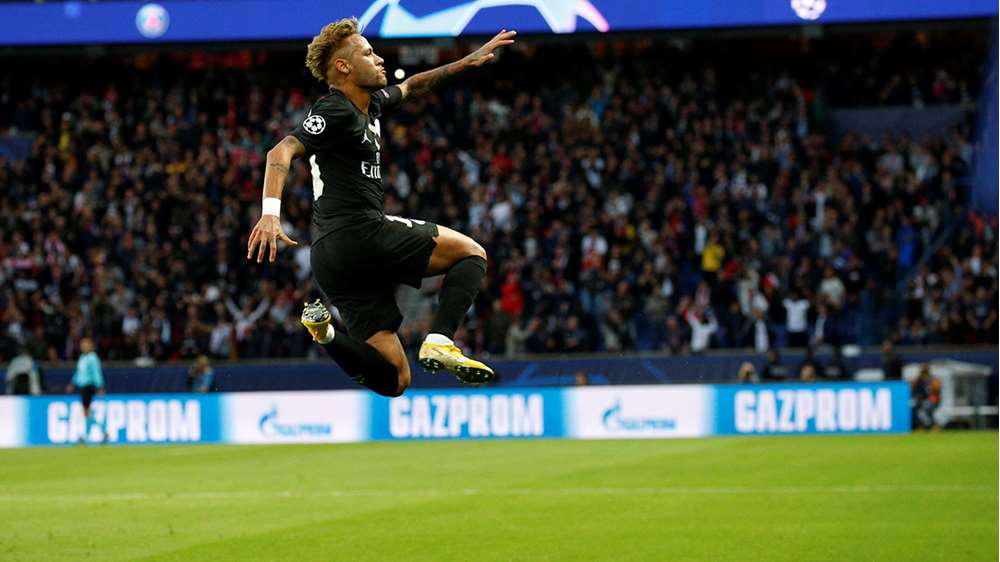 From further out? Not a problem, Neymar has also found the net 15 times from outside the box. And yes, the variety of his goals is matched only by his exciting hairstyles. 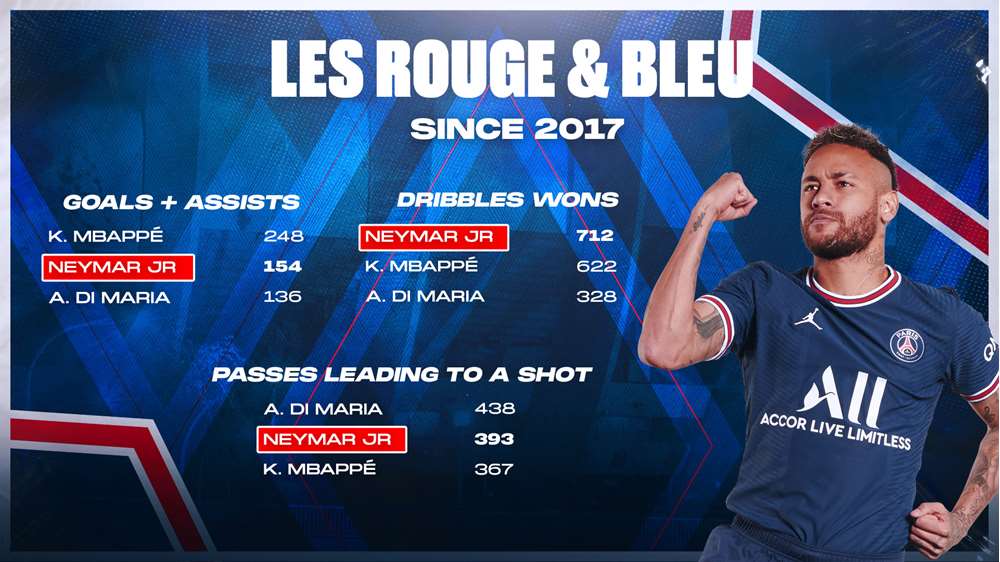 and on the pitch?

Neymar Jr has also provided us with a number of exceptionally exciting moments on the pitch.

We can all remember the tears at the end of the club's first Champions League final, or recall the campaign that took us all the way to the final. Like in the game against Galataseray, a game in which Neymar Jr. played a key role in the Parisian game, setting up Pablo Sarabia for the second goal, before scoring the third and sending Mbappé through for the fourth. All of this, before giving the penalty for the fifth to Edinson Cavani (5-0). 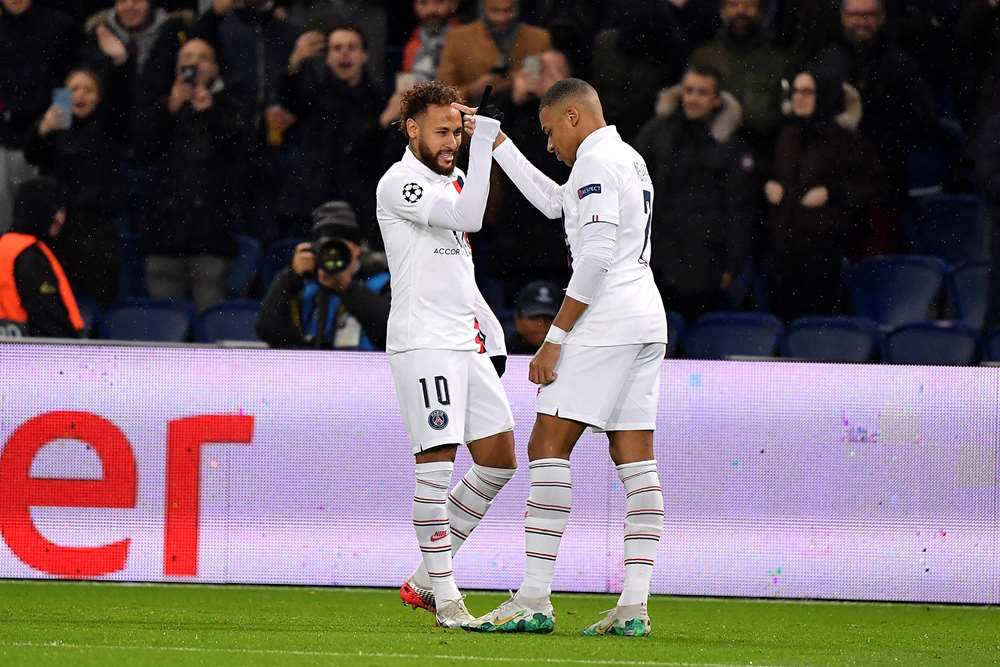 He also put in an unforgettable performance in the two-legs against Dortmund, where the Auriverde international was the star of the show. He scored the only goal for Paris in the first leg of the Round of 16 to keep them alive (2-1), and it was he who led the fightback in Paris, opening the scoring before celebrating on top of the stadium (2-0). 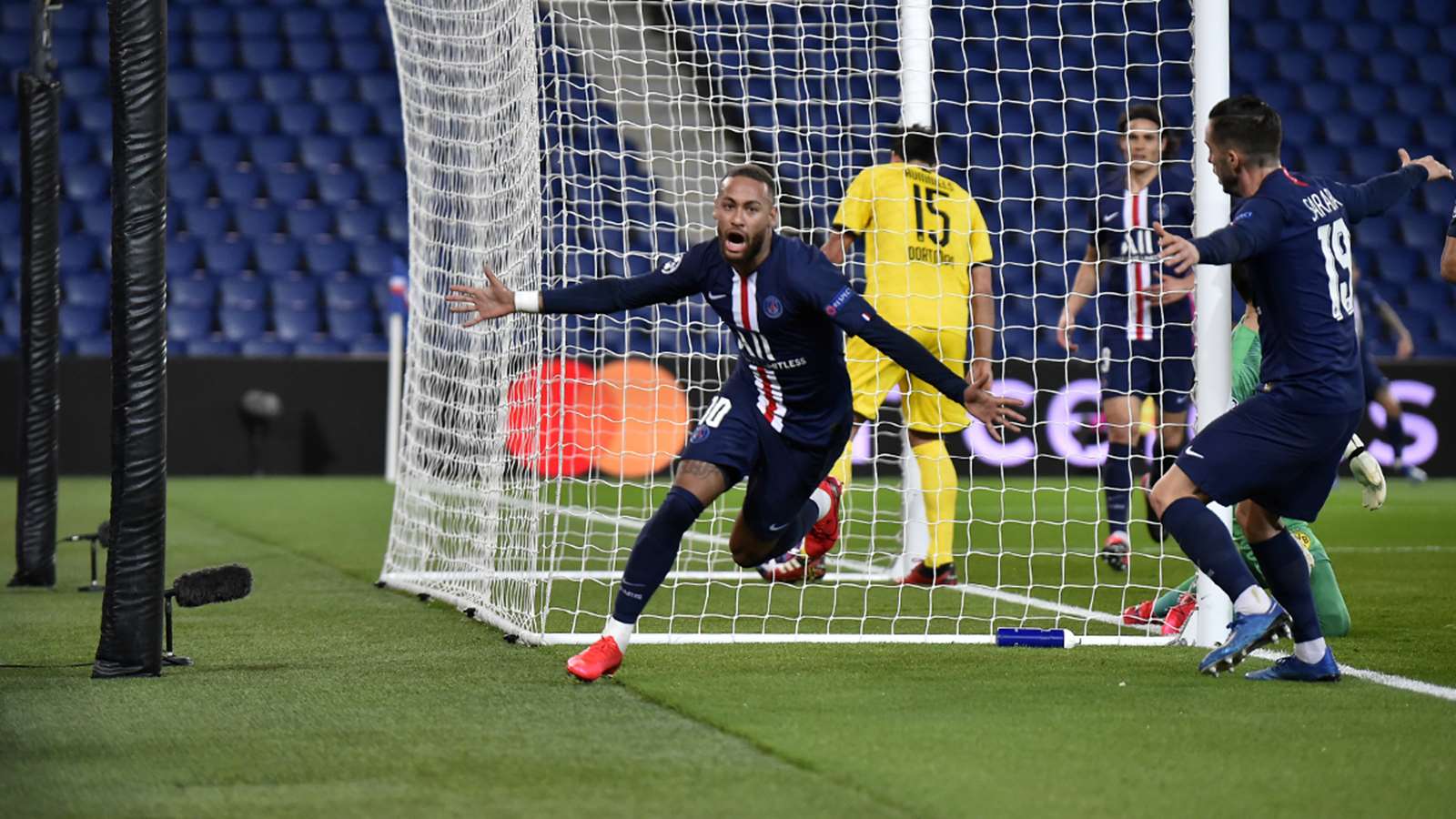 We also remember those moments of inner revolt, like the return after the summer of 2019, displaying the will of a player to free himself from everything that the media brought upon. To show that you can redeem the heart of a capital by offering the thrills it deserves. The first match of the season at the Parc des Princes, against Strasbourg, was the one where Neymar Jr saved his team by scoring the final goal of the game in the 92nd minute (1-0) with a superb overhead kick out of nowhere.

The next match, this time from the left wing and away at Olympique Lyonnais, with three minutes to go in regulation time, he decided to silence the entire Groupama Stadium (0-1). Neymar is often a story of emotions, and when he smashed the ball into the top corner of the Lille goal just after Kobe Briant's death is just another example of that. 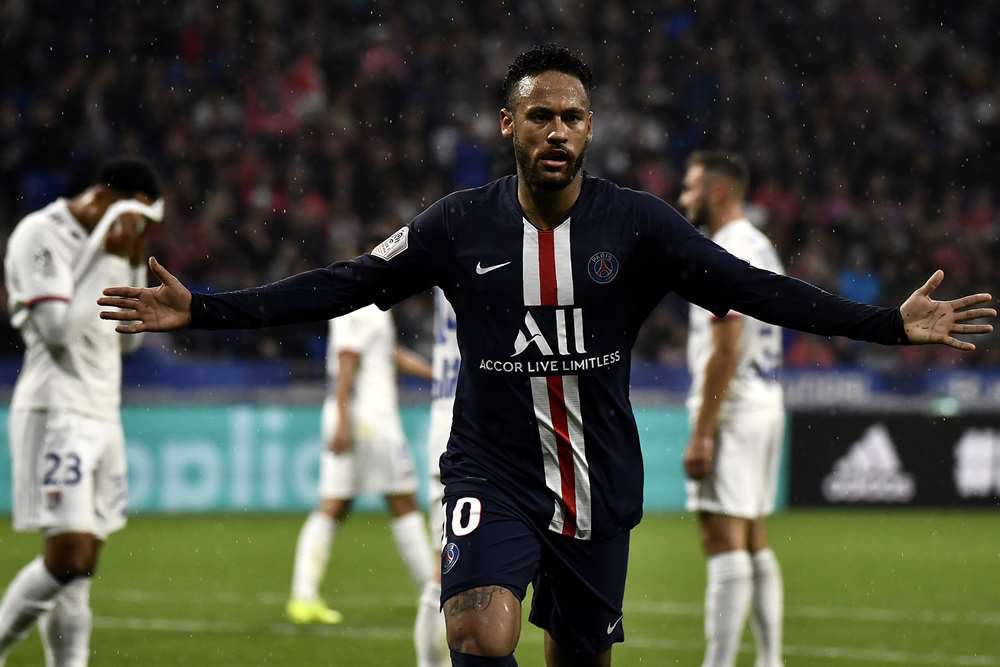 The hat-trick that he scored against Istanbul Basaksehir (5-1), 24 hours after the accusations of racism against the referees had forced the match to be stopped, was another demonstration. The Brazilian impressed on that when he nutmegged the defender before curling a right-footed shot into the top corner and opening the scoring. It was a gem of a goal and was voted the best goal of the European week.

And then there are a few moves from those 100 goals that we would be unable to dissect. His first stunning slalom at the Parc des Princes, for his first match against Toulouse, was an appetizer (6-1). There was also that incredible quadruple against Dijon in January 2018, from an on fire Ney (8-0).

Or the hat-trick more recently against Clermont, as the quintessence of the trio formed with Mbappé and Messi, both of whom provided assists for the Brazilian. After that match, Neymar Jr could also boast of having scored against 24 of the 25 opponents he has faced in Ligue 1! 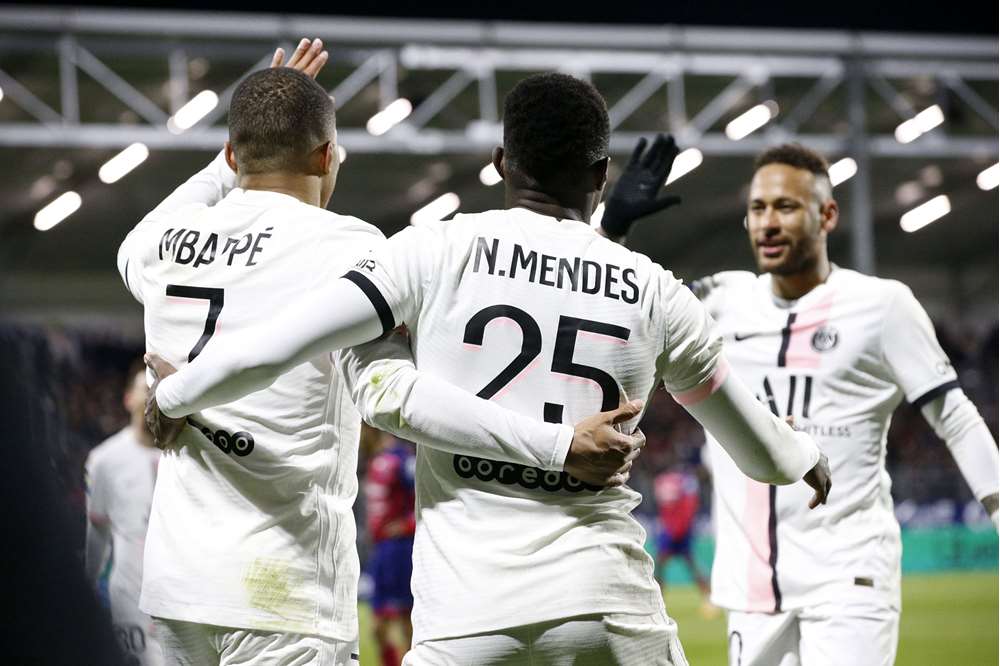 It is worth noting, by the way, that Kylian Mbappé remains our Brazilian's favourite passer, with no less than 20 assists provided to his teammate since his arrival! And if we take a look at the season that has just passed... It was the No10 who was the preferred passer for the league's top scorer, with five Ney-made assists for the No7. This was proof, if it was needed, of the complicity between the two players. 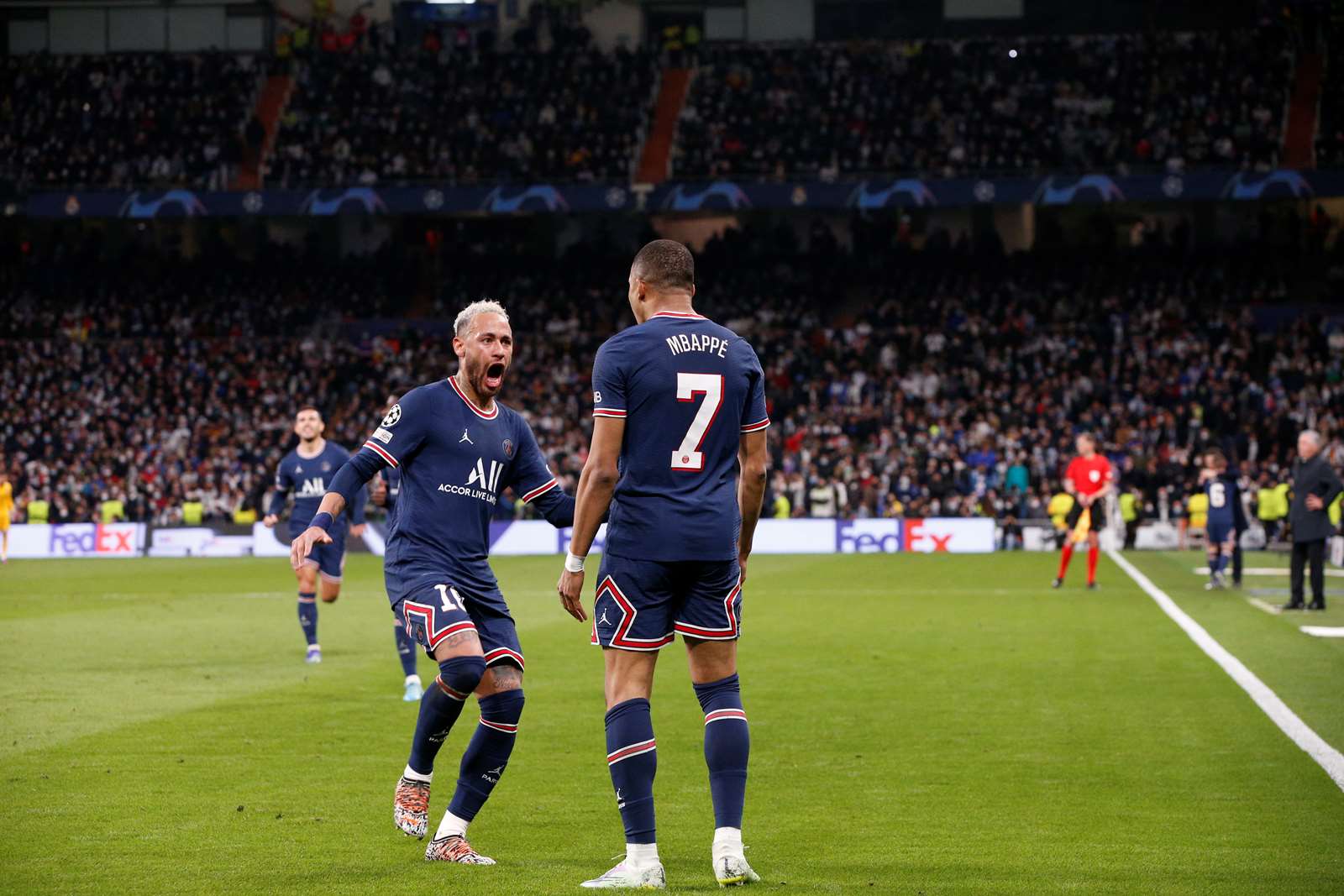 The symbolic barrier was all that was left for Neymar Jr. to become part of Parisian history. With 100 goals for the Rouge et Bleu, the Selaçao star has now left his mark on the City of Light.